Maruzar. Once the throneworld of a great, multi-planet-spanning empire, now reduced to an arid wasteland. City-states ruled by decadent warlords, diverse nomad tribes, and remnants of prehuman civilizations fight over the dwindling resources.

You play the heroes of a Drylander tribe, protecting its land and members from alien predators and raiders from the cities and other tribes. You also guard the ruins of your ancestral city, lest tomb-robbers take its sacred treasures or awaken technologies and beings that must never rise again. Welcome to Wastelanders of Maruzar.

SOMzines #1, Wastelanders of Maruzar, is live! This zine contains a complete TTRPG set in the vast, barren Drylands of the planet Maruzar, with light, easy-to-learn and cinematic style rules, quick character creation, and adventure seeds. Further issues will also contain the complete core rules, and detail other regions and peoples of Maruzar.

The game uses Vivid+, a system I designed for easy learning and GMing and a cinematic play style. Players are encouraged to be creative and describe their actions to get more Free Dice. Roll Free Dice + optional Effort Dice and add up the two highest. Rolls are player-facing (GM's don't have to roll), and only six-sided dice are used.

Damage and other consequences of failure are handled in a signature cinematic style in which players spend points of Guts, Wits or Luck to describe their characters having close calls instead of tracking numbers. The closer the call, the less you have to spend!

Wastelanders of Maruzar is a 54-page PDF that includes:

Also, looking for artists! I couldn't spare anything at this time for interior art, but if this project can raise some funds I'd like to commission one or two like-minded souls for an illustrated edition and art for future issues.

In order to download this game you must purchase it at or above the minimum price of $7 USD. You will get access to the following files:

Thanks! I kinda suspected Sky Pirates would get the votes :-)

Is that even a question?

But how is that different from Corsairs of Maruzar?

And do you have a Vivid+ SRD/Corebook that we can buy? I'm collecting Lite Systems haha and trying to make my own... kinda-Lite system so lots of research needed!

Currently trying to mix 24xx, Illuminated by Lumen, and FATE, but I also recently acquired Index Card RPG from a DTRPG sale.

Thanks for the reply! Corsairs will deal with the sea pirates. I'll be putting up an SRD later on. 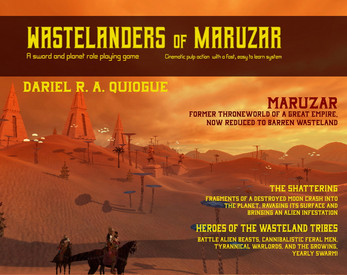